Growing up, Madison (20) hadn’t given her nose much attention. She didn’t think there was anything about her that stood out - until she started secondary school.

She says, “It all began at high school. I didn’t realise I had a bigger nose when I was younger, but as soon as I started Year 7, people were commenting on it and I was bullied quite badly. I was called names daily and jokes were constantly made about my nose. Even strangers on the street would say things. It made me so self-conscious.”

The children in school would call her Phineas Flyn – the character from the children’s cartoon Phineas and Ferb, whose head is shaped like a triangle. And if Madison did the backstroke when she went swimming, children would cruelly shout “shark”.

“I can laugh about it now,” Madison said. “But at the time it was upsetting. I was so self-conscious, and hated people looking at me from the side. I wouldn’t let people take my picture or be in pictures with my friends. Often, I’d find myself walking around with my hand covering my face. Of course, my friends tried to reassure me, but they couldn’t understand how I felt.”

She adds, “I thought about my nose daily. By the time I was in Year 11, I knew that I wanted to do something about it. I spoke to my parents and they said they wouldn’t let me have surgery until I was 18, but from then on, it was all I could think about.”

After leaving college, Madison went for a consultation with Transform Hospital Group to see what could be done.

“I was lucky that my parents could see the impact my nose was having on my life and they offered to pay for my surgery,” she explains. “My mum came with me to the consultation, and it was very thorough. They answered all my questions and gave me so much information, I knew I was in safe hands.”

In September 2019, Madison underwent rhinoplasty surgery. Her operation started at 8am, and she was back home by 6pm the same day. For the next 10 days, she needed to wear a splint to help protect her new nose.

“The operation was fine. It didn’t hurt, and I didn’t feel anything when I woke up other than the bandages around my face,” Madison said.

“For the first few days I had black eyes and my face was swollen. I needed to take two weeks off work while I let myself recover. But when I had the splint taken off, I burst into tears - I couldn’t believe how small my nose was! And I knew that it was still swollen from the surgery at the time, too.”

Twelve months on, the swelling on Madison’s nose has gone and she is incredibly happy with the results of her nose job.

She says, “It’s only been a year, but I can honestly say that having rhinoplasty has completely changed my life. My surgeon did such a good job that people I meet now can’t tell I’ve had anything done to my nose, as it looks so natural.

“I’ve got so much more confidence and I’m happy to have my picture taken now. In fact, I’ve probably had more pictures taken during this last year than I have in my whole life!” 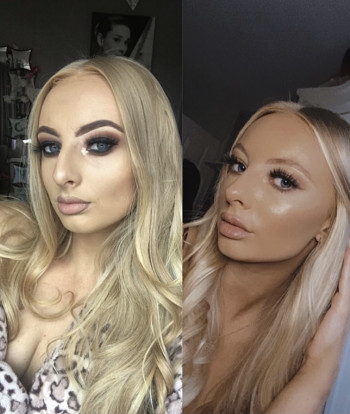 You must be over 18 in order to browse this site